I contain multitudes.
Here are their stories.
None has a legal birth certificate, but they reside in the same meatspace as one who does.
Live link to view as tree or as flat html

Brother, if only I knew I’d tell ya myself.
— One of Me

I’m not much of a gambler overall, but when I’m Quark, I’ll bet on anything. So polls are a good way to generate something to bet on, and you can trust me, I’m completely impartial as to who wins these.

Sixteen contenders from across the Alpha and Gamma Quadrants. Who is most disappointed in you? Who can destroy confidence with a single smirk? Who can defeat their enemies with nothing but infinite disdain, subtly expressed?
You decide!

Who’s winning after one day: 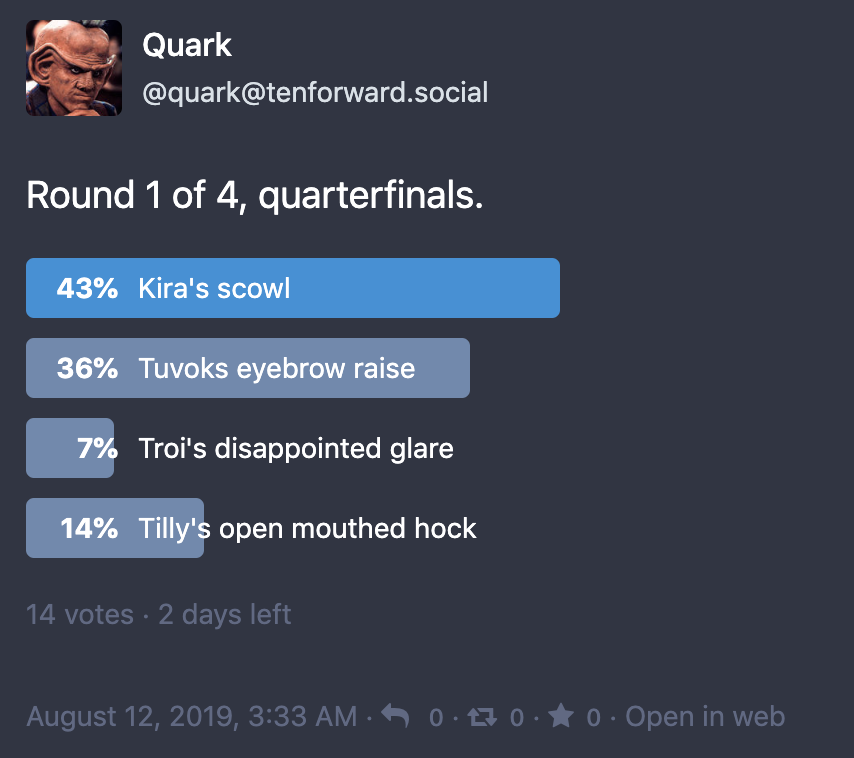 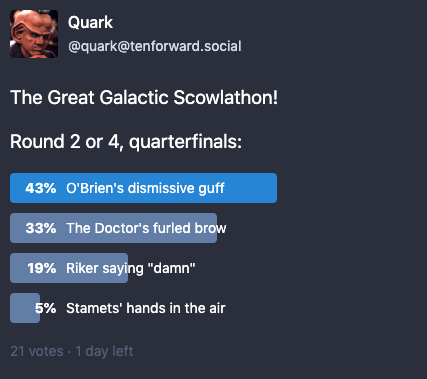 What has happened with Quark since the end of DS9.
Bit of fan-fiction, a bit of social commentary. Non-cannon obviously, just in my own head. Let's see if we can't reform our favourite Ferengi scoundral in some ways eh?

Did you hear that after Sisko went to join the Prophets Quark ended up hooking up with…oh, I shouldn’t spoil it.

Over on Ten Forward there’s some recurring discussion of someone producing a video supercut of every time Quark says “feeemaaales” in only the way he can. The idea is that a lot of angry, scared, delicate masculinity defenders out there often refer to women and girls as females in their speech. This is perhaps an attempt to seem scientific but it only really serves to dehumanize women into nothing but their gender. I think it’s also a kind of passive-aggressive act against LGTBQ and transgender people in particular to stress their strict two-sided view of gender.

So the question is, what if Ferengar, the most mysogynistic culture in the Star Trek universe had feminist revolution? What would the Trek me-too movement look like? We already had a preview of it near the end of DS9 as Quark’s mother started to sway the magnificant lobes of the Grand Nagus himself. The future Nagus, Quark’s brother Rom is not only a complete Socialist but he also respects women for their minds once his wife explains it to him.

This might be a good idea for an in-character essay or story from Quark. I’ll think about working on it. If you have seen anything related to this in Star Trek of fan fiction feel free to let me know on Mastodon @quark@tenforward.social.

Cory Booker comment about me. What I’m sure will be the first of many news items on the topic of our day, what politicians think about ferengi and me personally with respect to the current political situation.